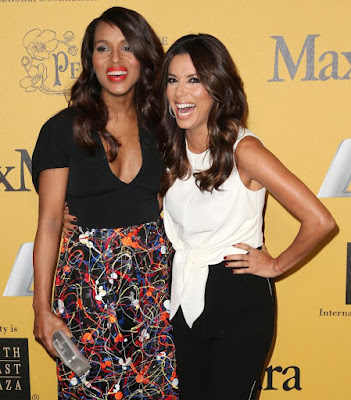 Eva Longoria (Desperate Housewives) and Kerry Washington (Scandal) are set to produce and star in 24-7, according to Deadline. The film, described as a workplace comedy, comes to us from screenwriter Sarah Rothschild (Love, Unscripted). Longoria, alongside Ben Spector from her UnbelieEVAble production company will produce, as well as Washington through her Simpson Street. The film has been picked up by Universal Pictures. Sara Scott will oversee the development of 24-7 for Universal and Will Rack for UnbeliEVAble.

Longoria is known for playing the role of Gabrielle Solis on the ABC drama Desperate Housewives, from 2004-2012. She received Golden Globe and Screen Actors Guild Award nominations for her work on the show. She recently played Ana Sofia Calderón on the NBC sitcom Telenovela. She appeared on the series Empire as Charlotte Frost this year. Longoria has also been seen in Harsh Times, The Sentinel and Over Her Dead Body.

Washington is known for for playing crisis management expert Olivia Pope in the ABC series Scandal from 2012-2017. She’s been nominated for an Emmy Award for Outstanding Lead Actress, a Screen Actors Guild Award and a Golden Globe. Washington has also been seen in 2012’s Django Unchained as Broomhilda von Shaft. She starred opposite Jamie Foxx, Christoph Waltz and Leonardo DiCaprio. The film was directed by Quentin Tarantino. Washington appeared in Ray, Mr. & Mrs. Smith and the TV movie Confirmation as Anita Hill. She voices the role of Natalie Certain in the upcoming Disney/Pixar film Cars 3, which will hit theaters on June 16, 2017.

Rothschild is known for her writing work on Love, Unscripted, the Universal film The Gauntlet and The Dog Walker, with Alison Eastwood attached as a director.