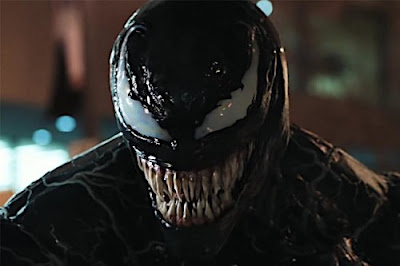 Eddie Brock and his symbiote significant other will be back next year for Venom 2, the much-anticipated sequel to Sony’s surprise smash-hit origins movie for the Spider-Man villain/antihero. And as is clear from the post-credits scene of the 2018 film, Venom 2 will see Brock go up against his nemesis, Cletus Kasady AKA Carnage, as played by Woody Harrelson.

With filming set to begin this month, star Tom Hardy has now shared a new teaser image for the sequel on his Instagram account. The British star posted a piece that gives the classic image of the comedy and tragedy theater masks a twist, with Venom wearing a sad expression and Carnage a happy one. Hardy captured his image “W3’R’V3N0M2.” 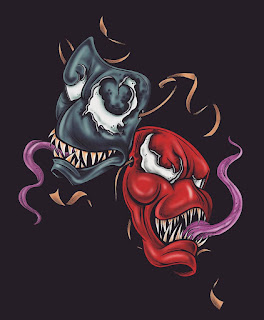 In Venom, Cletus appeared as a prison inmate who Eddie interviews. The unrepentant serial killer warns that he’s going to get out and when he does, “there’s gonna be carnage.” As the duo’s meeting was only brief in the movie, it’s unclear how Kasady encounters the Carnage symbiote on screen, but somehow he will and he’s going to make Eddie’s life a misery when he does.

Will Venom have any help in defeating him, though? Well, fans are keeping their fingers crossed that Tom Holland will show up as Spider-Man, following the renewed Sony/Disney deal. After all, Hardy did recently share a pic of himself in a Spidey costume before swiftly deleting it, which has got some thinking he was alluding to something that he probably shouldn’t have.

In any case, we know that Venom 2 will also feature the female villain Shriek, Carnage’s lover and partner in crime, who may be played by Naomie Harris. The Bond star did previously work with director Andy Serkis on Mowgli, but her role has yet to be officially announced just yet. With production kicking off shortly though, we should get some more news soon.