Samuel L. Jackson Says Captain Marvel’s The Most Powerful Hero In The MCU 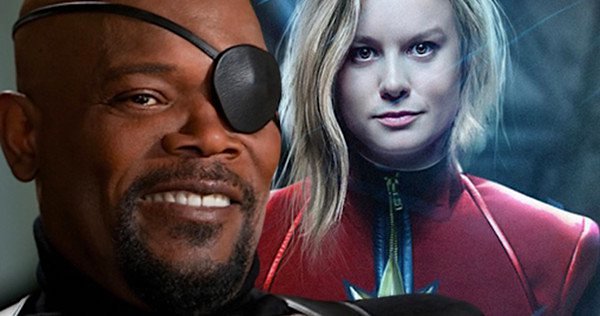 As Nick Fury, it was Samuel L. Jackson’s final heroic act to cast his mind back to the 90s and remember how to use his pager so he could message Captain Marvel at the end of Avengers: Infinity War. Portrayed by Brie Larson, she’s surely the best hope the heroes have if they’re to take care of Thanos and reverse the mess made by his Snap of Doom. No pressure, then.

This weight of responsibility is being carried squarely by Larson, both on and off the screen, it seems. In a recent interview with Vulture, Jackson recalled the conversations he had with her on the set of Captain Marvel, where she mused: “I’ve got to represent not just me, Brie as an actress, but every woman on the planet as a strong woman. This character means so much to the franchise!”

“She wants it to be a special film, she wants it to represent women, she wants it to be a film that has heart and depth,” Jackson said. “Brie grabs information from everywhere, too. “Who was the first female pilot? What were her struggles? She wants to make sure all of that is embodied in the character to give it the justice of the woman’s struggle, to follow her from where she was to becoming this great force, because she’s the most powerful character in the Marvel cinematic universe.”

More powerful than the Mad Titan? Let’s hope so, because as awesome as Thanos is, an ass-kicking at the hands of Carol Danvers is really what we’re all hoping for, right?

Anyways, after Black Panther made great strides for diversity in the world of cinema, Captain Marvel looks set to take it to the next level as it becomes the first female-fronted MCU movie. Speculation is rabid at this point as well, with leaked set photos doing the rounds and imagined fan art depicting how Carol Danvers might’ve reacted to Thanos’ snap fueling our hunger. But to date, we’ve still seen nothing official.