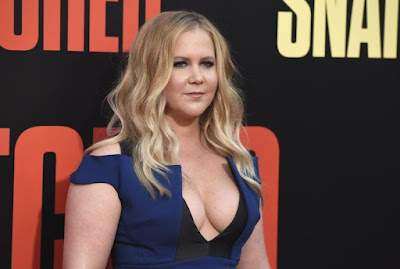 Amy Schumer, is circling a new project from Voltage Pictures. Written by Katherine Fugate (Valentine’s Day), "Christy Martin" is a true story about the world champion boxer who had to fight through a man’s world to gain success and later personally found herself fighting for her life. This would be a turn for Schumer as it's a gritty drama — but what a great story — about a woman who never gives up and who keeps going despite every odd against her.

Christy came from little, rose up the ranks of her sport, found success but not true love until later when she realized who she was personally. She was then beat & left for dead by the man she trusted.

The story is based on the life of Martin (now going by Christy Salters) who grew up earning the nickname in the boxing world of The Coalminer’s Daughter after she won a boxing competition. By 1990, she was in the boxing ring pushing the glass ceiling for women to be allowed to box.

When she walked into the gym to train, a trainer named Jim Martin made sure her ribs were broken to try to get rid of her, but Salters healed and came back in. Eventually, she would go on to marry Martin.

She was the first woman to sign with Don King, the famed boxing promoter, who then started signing her into several pay-per-view fights. She started knocking out her opponents one by one and kept rising up the rungs of the ladder until she reached the top. She maintained that until 2003 when Laila Ali came into the ring with her.

Behind the scenes in Orlando, her life was no picnic with the controlling and violent Martin. Christy Martin, who had been involved with women earlier in her life, fell in love with another woman and decided to leave her husband for her lover.

That pushed Jim Martin to the edge and one night, the anger and violence in him snapped completely. He brutalized her, stabbed and then shot her as his wife fled the house trying to save her own life. She ended up in the hospital (as did he from self-inflicted stab wounds) and then he ended up in prison.

Christy Martin, who eventually changed her name back to her maiden name of Salters, refused to back down and would stand before Jim Martin once again — to testify to put him behind bars.